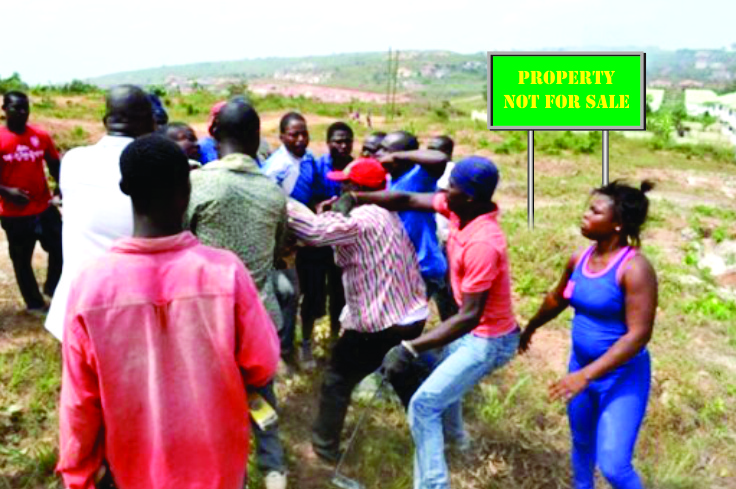 The doctrine of notice

A doctrine is a belief, a system of beliefs or a fundamental principle that is accepted as authoritative by a person or group of persons and to have notice of something is simply to be aware of that thing. Therefore the doctrine of notice in the context of real estate simply means an acceptable authority whereby information is or should be given to the owner of the title of land or future owner of the tile of any equitable interest/interests that may be associated to the land.

Simply put,it is an authority which informs the owner/owners of land or intending purchasers/owners of the land that there is an existing interest in the land. This interest is usually equitable, meaning that it  has not been perfected. The implication here is that if the land is registered ,it is presumed that the purchaser would have notice upon proper investigation (Search at the appropriate authorities/ government offices.

Therefore, the doctrine of notice is meant to ensure that the owner/intending owner of the property to be aware of all the equitable interests associated with the property ,thereby not becoming encumbered by them. This is because it is to the interest of both parties to be aware of such interests.

For a purchaser to take ownership of land free from any other equitable interest in that property, he/she must prove that he/she is a bona fide purchaser for value without notice. The conditions for this include:

B. The purchaser must give value:
It is necessary for the person who acquires the estate to give value if they are to rely on the notice rule. They need not have paid the full market rate for the property, but the amount paid cannot merely be nominal and would not include a gift. ‘Value’ not only includes money and money’s worth, but also takes into account some other forms of consideration, such as services rendered, labor etc.
The amount paid must commensurate with the actual market value of the property, for instance, If a property is valued twelve million naira and it was sold to you for three million naira, you are not an innocent purchaser for value without notice because the price of the property is manifestly and suspiciously low.

WHAT CONSTITUTES NOTICE: That which is reasonably capable of showing an intending purchaser or owner that someone else has existing interest on the land. The most important notice known to law is registration of  title and possession.

The judgment of Andrews Otutu Obaseki  J.SC in the case of Alhaja Juradat Animashaun v. G.A Olojo SC/169/1988 delivered on the 5th day of October ,1990 sheds more light on what constitutes notice:
The parcel of land sold here has been described as the plot 27 in the landed property owned by Chief J.A. Ajao (deceased). The land was therefore part of the estate of Chief J A. Ajao (deceased) and vested in the executors of the Will of the deceased.  J.A. Ajao Brothers managed the plots and allocated and sold them to purchasers. They have now found themselves in the awkward position of having sold plot 27 to two people.

First they sold it along with plot 28 to the respondent in 1975 and collected the purchase price. But no conveyance in respect of plot 27 was given. In 1976 they also sold and conveyed the same plot 27 to the appellant. When they sold plots 27 and 28 to the respondent, it was in exchange for plots 765 and 766 for which they had collected payment and when they allocated plots 27 and 28 in substitution, as these plots were of larger dimension, they demanded and collected N1128.00 as additional payment to the N3000.00 collected previously.

When Ajao Brothers subsequently sold plot 27 to the appellant, they sold it for N1000.00  they executed a Deed of Conveyance dated the 9th day of April, 1976 registered as No.35 at page 35 in volume 1504 of the Register of Deeds  Lagos.

The court held that the plaintiff  failed to prove that she was a bona fide purchaser of the legal estate of the disputed land without notice of the prior equitable interest of the defendant. If she had inspected the land at the time of sale, as a reasonable purchaser would do, she would have discovered that the defendant was in possession and if she had gone further to enquire about the nature of possession, she would have had notice of the nature of his interest.

The court held that since plot 27 was already sold to the defendant/respondent and who was put in possession before the appellant bought and received the conveyance , she bought subject to the equitable interests in the land acquired by the respondent. if she had visited the site of the land, plot 27 before completing the purchase, she would have found that the respondent was already in possession of the land and then further enquires would have revealed that her vendors had already sold the plot and collected the purchase price from the respondent.

“if there is proof that money was paid for land coupled with the entry into possession, it is sufficient to defeat the title of a subsequent purchaser of the legal estate if possession is continuously maintained.” See T.A. Orasanmi v. M.O. ldowu (1959)4 F.S.C.40; [19591 S.C.N.L.R.97.

Note that in this case, the equitable interest of the party who purchased first was  held against the legal interest of the second party because he was in possession. If the first purchaser was not in possession, there would have been no notice of his interest because there was no conveyance executed and registered. This was adumbrated in   Soremekun v. Shodipo (1959) L.L.R.30 to the effect that if land is sold to a party without execution of a formal deed of conveyance, his interest was no more than equitable. Legal estate of another party would be more preferred to it if the party with the equitable interest is not in possession.

It must be noted that all these cases appear to lay emphasis on possession, even if it was an equitable interest. Therefore when a party takes possession upon the purchase of the land  (not as a trespasser ) , it cannot be overridden by a legal estate. This principle accords with the decision of the Privy Council in  Oshodi v. Balogun and Others 4 W.A.C.A. 1 at page 6 and Sulaiman and Another v. Johnson 13 W.A.C.A.213. Whether land is sold under native law and custom or merely sold without executing a formal deed, The court held and I quote. “It seems to me that if the purchaser is in possession for a long time,  equitable interest thus created cannot be superseded by a subsequent legal estate. In effect, it matures into legal estate “

We in Property Advisory Network ,Having  adumbrated who the owner of a property is and who is the innocent/bonafide purchaser of property without notice. We use this opportunity to advise property owners and Purchasers as follows:

For the property owners, when you buy/acquire a piece of land which is not registered  and a deed of assignment is executed for you, do not stop there. (Experience has revealed to us that majority of people who buy land in Nigeria just take their deed of assignment (if at all that is executed ) and lock it up in their boxes without more. The negative implications of this bad attitude to real estate transactions would be discussed latter ).

Take your deed of assignment to register it at the appropriate government department and proceed to obtain your Governor’s consent. When you fail to do this, you are putting your property in jeopardy and you stand the risk of losing it to an innocent/bonafide purchaser of value who would not have any means of knowing about your interest in the land. However, in the event you are not able to secure the Governor’s consent which shouldn’t be, register your deed of assignment and take possession of the land ( physical control of the land either personally or through an agent or servant). What constitutes actual possession is a matter of fact and this will be discussed subsequently.

And for the purchasers ,look out properly and confirm if someone is in possession of any land you intend to purchase and take time to engage a professional if you are not one to conduct necessary searches in the appropriate government departments to find out if there is any kind of registration on the land or any other party’s interest on the land. How to conduct a proper search would also be discussed subsequently.

It is our firm believe that when this is done ,the issues of double sales and purchase of land would be a thing of the past except for persons who chooses to use all illegal means to disposes people of their land. When possession or/and proper registrations are involved. It minimizes their chances.