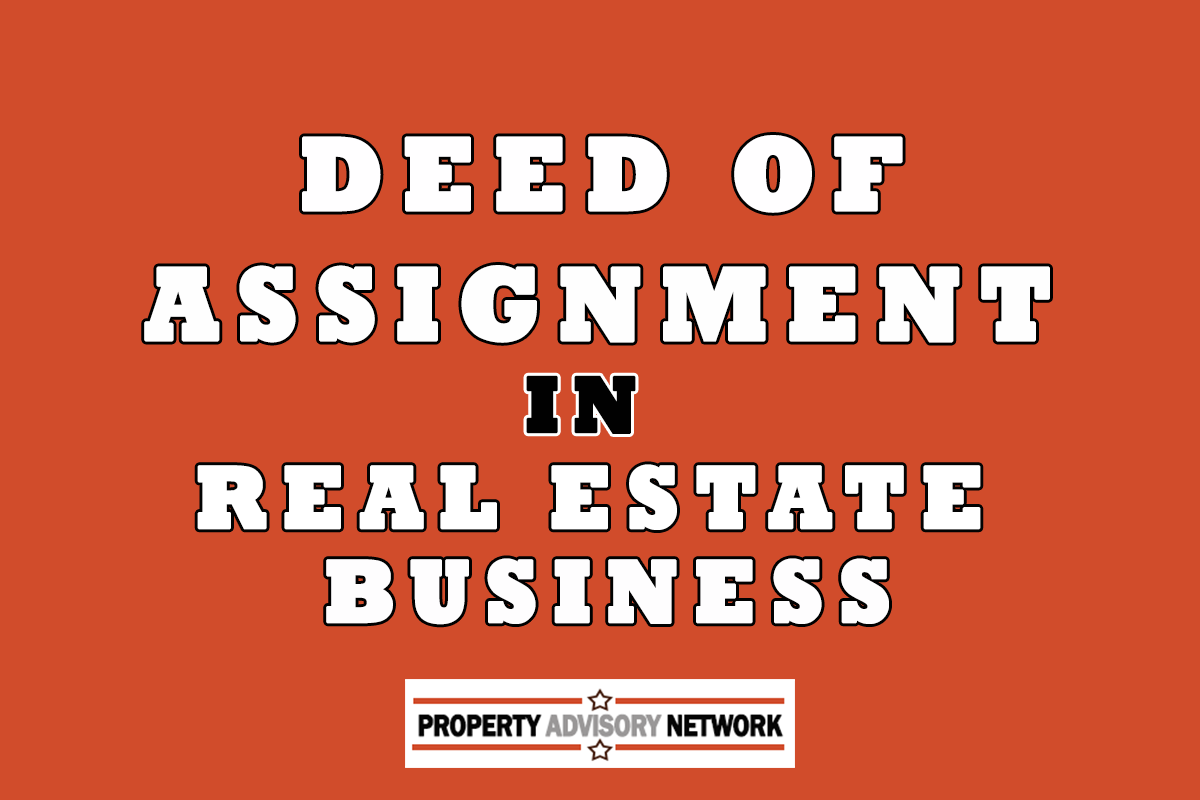 A society without law is a society in chaos, as it is human nature to associate and during association disputes are bound to occur. There are different laws in force to regulate day-to-day activities as citizens of Nigeria such as The Constitution, Criminal Code Act, Judicial decisions, Land Use Act and so on. Some laws applicable to a deed of assignment are as follows: The Land Use Act, The Illiterate Protection Act, Land Instrument Registration Laws etc.

A deed is a legal instrument used in real property transactions in Nigeria to create a binding obligation and effectively transferring an interest or right.

A deed of assignment refers to a legal document which an assignor(transferor) states his willingness to assign the ownership of his property to the assignee(transferee). The deed of assignment is required for any transfer of the seller’s rights, title, interest and ownership in respect of a property to the buyer. It is a written proof of ownership which stipulates the kind of rights or interest being transferred to the buyer which is a legal interest.

Contents of a deed of assignment

The contents of a deed of assignment can be divided into 4 parts namely; The introductory part, the operative part, the miscellaneous part and the concluding part.

The parties to the deed must be legal persons which can consists of natural persons and entities with corporate personality, the name, address and status of the parties must be included. The proper descriptions of the parties are assignor (seller) and assignee(buyer). In Nmbia v. AG Rivers state (1999)3NWLR part 593, page 82, it was held that only parties named and described in the deed can sue.

The Recitals gives the material facts constituting the background to the current transaction in chronological order. In Nigel v. Rockonoh properties limited (1995)2NWLR part 378, page473, it was held that a recital explains the reasons for the transaction. A recital can be introductory or narrative.

c. The receipt clause: This adds value to the statement of consideration and proves that the vendor acknowledges receipt of the consideration. This clause is usually in bracket.

ii. Quiet enjoyment: the assignor conveys the right of quiet possession and enjoyment to the assignee.

The above mentioned can, upon consensus by the parties involved, be excluded by inserting an appropriate clause in the deed.

e. Word of grant: this assigns, conveys or transfers the interest in the property.

f. Parcel clause: this clause gives a well detailed description of the property which is the subject matter of the deed.

3. Miscellaneous part:
a. Indemnity clause: this is an undertaking by the assignee to observe all covenants and conditions accruing from the property. An assignor can also undertake to indemnify the purchaser for any defect that may arise in respect of his title.

4. Concluding part: this contains the testimonium, execution and attestation clauses.
a. The testimonium: this shows that all the parties are involved in the execution of the deed.
b. Execution: this means signing. The capacity of the parties (either individual, corporate bodies, illiterates) is of great essence in the mode of execution. Format of execution is as follows;

1) Regular individual: SIGNED, SEALED AND DELIVERED (in the presence of the within named assignor/assignee).

2) For illiterates: illiterate jurat will be applied in line with the provision of the illiterate protection act i.e

By the within named assignor…..

The content of the document having been first read and interpreted to him from…… to………. by me…………. (Sworn testator) when he appeared perfectly to have understood it before affixing his thumb print thereto.

Before me
Commissioner for oath

The common seal of……… Ltd was affixed to it following a resolution of the company dated the ………day of…….20…..

c. Attestation: this refers to the witnessing of the execution of the deed by witnesses.

It is however pertinent to note that franking is an essential feature of a deed of assignment. This is the endorsement of the name, address, seal and stamp of the legal practitioner who prepared the deed of assignment. This is duly provided for in Rule10 of the Rules of Professional Conduct (2007) which provides thus “A lawyer acting in his capacity as a legal practitioner shall not sign or file a legal document unless there is affixed on any such document a seal and a stamp approved by the Nigerian Bar Association” .

This is the process in which the solicitor for the purchaser obtains the Governor’s consent for the actual alienation or transfer of the interest in a property. Where the property is subject to a statutory right of occupancy, the owner of the right must obtain Governor’s consent while where the property is subject to customary right of occupancy, the consent of the local government where the land is located must be obtained.

Stamping: this entails payment of stamp duties and taxes imposed on the transaction. The original document and copies are presented to the stamp duties office for assessment of the duty payable. Failure to pay stamp duties makes the Deed of Assignment in acceptable for registration.

A SAMPLE OF A DEED OF ASSIGNMENT

THIS DEED OF ASSIGNMENT is made this……. day of …..20……. BETWEEN MR. ABC of ……….herein after referred to as assignor (which expression shall where the context so admits include his heirs, executors, successors in title and assigns) of one part

Mr. XYZ of ………………….herein after referred to as assignee (which expression shall include where the context so admits include his heirs, executors, successors in title, and assigns) of the other part.

1. The vendor is the owner of a plot of land located at ……… covered by certificate of occupancy registered as number…… at page…..in volume…….. of the land Registry at……..with survey plan number……… dated………

NOW THIS DEED WITNESSES AS FOLLOWS:

4. The assignor assigns all that property located at ……… covered by certificate of occupancy registered as number…… at page…..in volume…….. of the land Registry at……with survey plan number……… dated………to the assignee.

In the presence of:

In the presence of: